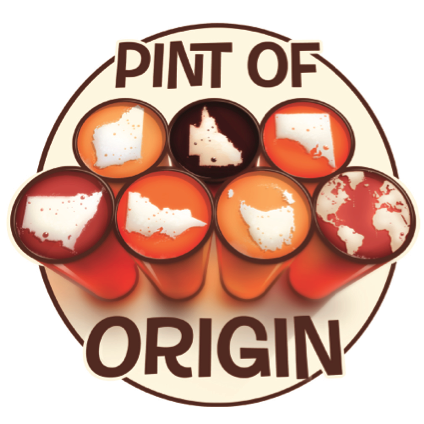 The Crafty Pint’s pocket of Good Beer Week is a weeklong showcase of the best beers from Australia and the wider world.

A dozen of Melbourne’s very best beer venues are turning over their taps to beers from the six Aussie states plus New Zealand, Europe, the US and, for the FIrst time, Canada. There are regional showcases in Geelong and Bendigo and, in recognition of the huge number of breweries in Victoria and New South Wales, two venues representing each: one focusing on Metro breweries, the other on regionals.

Look out for another PoO comp run with live taplist app Now Tapped. If you’re a Crafty Cabal member, look out for PoO specials too. And, if you fancy the ultimate PoO experience, then join The Crafty Pint and Ben’s Brew Tours. They’re visiting 12 inner Melbourne Pint of Origin venues across two tours. Each features six venues, four beers per stop, lunch, door prizes, discounts & surprises.

It’s the best way to get the full Pint of Origin experience, meet like-minded beer people, and visit venues you may not have been to before. Crafty Pint founder James Smith will keep you up with the play as you explore the beers from across Australia, while Ben’s Brew Tours will ensure you don’t have to worry about transport all day!

And, of course, when enjoying PoO, don’t forget to hashtag #PoO16.

Beer DeLuxe Hawthorn hosts Dieu Du Ciel, Les Trois Mousquetaires and Le Trou Du Diable among others, as a showcase of Canadian craft joins the Pint of Origin lineup for the first time.

The Cambrian is located smack-bang in Victoria’s centre, making it the perfect place to imbibe the freshest beers from nearby co-conspirators Holgate, Tooborac, Brookes and more all week long!

With huge parties, massive tap takeovers, meet the brewer sessions, pop up bars and a 4am licence, you’ll probably want to make sure your calendar is clear for this year’s Pint of Origin Europe.

The Pint of Origin concept is going regional! For GBW 2016, The Geelong Hotel will be helping get things off on the right foot by giving over a bunch of taps to regional brewers for the afternoon.

With rapid growth in the number of breweries both in Geelong and as far west as Barongarook there’s never been a more exciting time to come and check it all out in one location.

The kitchen will be cranking out delicious beer food all day and there’ll be brewers everywhere who love nothing more than talking about beer, over a few beers…

The Alehouse Project is New Zealand’s home for the fourth year. Boundaries are pushed with 100+ of New Zealand’s best beers pouring over 12 taps and hand pump, and Meet the Brewer sessions every night.

Brother Burger and the Marvellous Brew’s southside joint joins the Pint of Origin fun, lining up the best regional NSW’s vibrant scene has to offer. Come and sample them while enjoying the awesome food!

The finest brews from regional Victoria come to Richmond’s hidden gem, the Cherry Tree Hotel. Eighteen taps feature styles from across the beery spectrum and from all four corners of our home state!

The Great Northern Hotel is again the home for Pint of Origin USA. Sample some of the best the US has to offer, including beers never seen before in Australia, and awesome brewery parties.

The Royston is taking Pint of Origin WA to a new level, with the finest beers and legendary people from WA’s most sought after breweries. New beers, tap takeovers, brewer shouts, and a custom GBW menu.

The Gertrude is back for the fourth year as Tasmanian hosts for Pint of Origin. In true Southern hospitality style, you’ll be invited in to hug a brewer or sample Tasmania’s native brews.

The Terminus will be celebrating Victoria’s beer scene with brewer events, a Boatrocker masterclass, and one of the greatest collab brew day parties ever! There’ll be special brewery releases, one off beers, collaborations and plenty more.

The Fitzroy Pinnacle is one of Melbourne’s most iconic old pubs. This year, the Pinnacle’s bringing the Pint of Origin sunshine, welcoming the best of Queensland’s fast-growing beer scene onto the taps.

For the fifth year, Rainbow will be turning the taps over to one of the most exciting states in brewing. With our famous beergustation dinner, food specials and live music it’s not to be missed.